Damien Hirst has played a blinder. Make no mistake: he will take his place in the annals of Art History, despite having no discernible artistic talent whatsoever; his show at the Wallace Collection, variously described as ‘risible’ (by me) and ‘juvenile’ (by Adrian Searle), was proof enough of that. 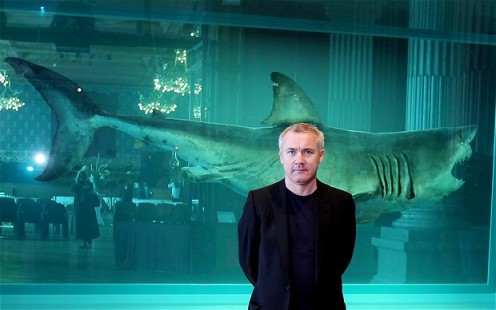 Riding on the coat-tails of Conceptual Art, Hirst has become its apotheosis, and therefore, all being well, the final nail in its coffin. After the banality, the unashamed and ubridled ‘appropriation’ (see below) – what the great Anselm Kiefer termed ‘Anti-art’,- there is surely nowhere left for it to go.

You see, his greatest work, his masterpiece, is Damien Hirst: he has taken the ‘idea’ of himself as an artist, an ex-enfant terrible, and run with it, creating a global brand made spectacularly manifest in the fatuous ego-fest that is the Gagosian exhibitions. This, self-promotion, is his genius.

Where does that leave the work itself?
It leaves it to a large degree irrelevant, a mere prop in the pantomime. It is contingent, tangential; it cannot stand alone, it needs it ‘author’ (ha!) and critics who should know better to speak for it, to give it context, because without Hirst it has neither meaning nor value. This is just about the worst thing I can say about ‘art’ – call me old-fashioned but I believe in autonomy: good art needs no apologetics, it is entire unto itself; it has integrity.

So when I see Hirst banging on that “art is more powerful than money” I wonder why he doesn’t just pull his finger out and make some (art, that is; we all know he’s as rich as Croesus)? Or is it just another disingenuous ‘line’ in the ‘Damien Hirst Show’ that has about as much real heft as “It’s behind you!”?

Go to the Hockney and be ‘exhilarated’; be ‘seduced’ by the Freud. Go to the Hirst(s) and think ‘What the fuck?’

It’s not enough, and never was.