The demise of Thomas Kinkade at the stupidly young age of 54 has forced me, screaming, to grit my teeth, brace myself, and have another look at his stuff. (I say ‘stuff’ ‘cos I can’t quite manage to make my digits type the ‘a’-word in this context.) 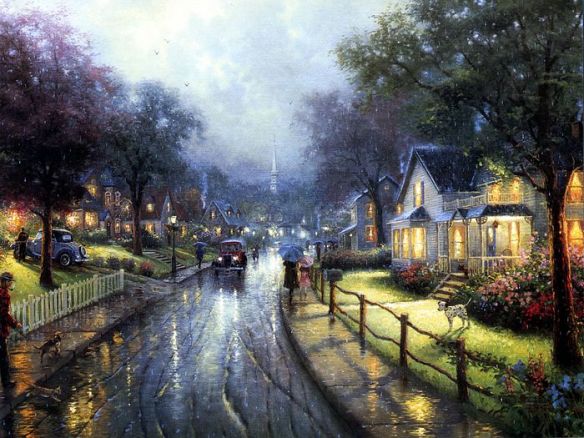 Ghastly, isn’t it, this Disneyfication of nostalgia, this cynical selling of a dream that never was, of ‘home’ and ‘family’ (complete with faithful spotty dog), to, especially, evangelical, conservative ‘God-bothering’ folk who we (I) feel should really know better and get a grip. And all the more contemptible to an art snob (me) because, as my pal reminded me, Kinkade actually could paint: 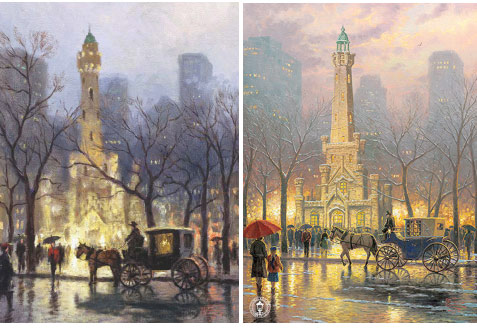 But then, as we say Up North, I caught myself on.
The painting at the top of the post is called Home Is Where the Heart Is. Coincidentally (not really), that is also the title, pretty much, of a recent(ish) Sunday evening schlock-fest on UK telly – you know the type: vets, doctors, posh folk, midwives, village policemen, all set in a lazy-hazy version of long-gone ‘good old days’ and designed to make us forget for an hour the fact that in 12 hours we’ll be grumpily going off to a job we loathe.  Both painting and TV series are operating from exactly the same basis (note the central church tower in each) : as a palliative against present, here-and-now dissatisfaction and discontent. (This is very much a political issue, but if I go down that route now I’ll bore myself to death, so I won’t.) 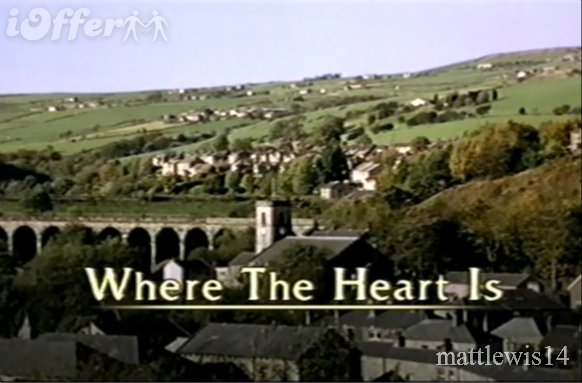 But more disturbing for me, a rabid fan, is the gruesome admission that Coronation Street, that very finest of soaps, operates from, gulp, this basis too. (Eastenders sucks: not enough jokes, and where else, other than in Corrie, would you get actors like Ian McKellen and Nigel Havers ripping the piss out of themselves?) Corrie offers us a vision of a tight-knit northern community (it’s always about ‘community’), centred around a ‘real’ pub, where everyone knows everyone else’s business and where, eventually, everything comes right in the end. It’s a place which I, born amongst the cobbles, think I know, but it’s no more ‘true’ than Kinkade’s ‘cottage fantasies’.
I love it.

So where does that leave me? Admittedly I’m not one of those who conflate the actor with the character and shout abuse in Asda at ‘Richard Evil Twat Hillman’ and ‘Sally Daft Cow Webster’, but I do buy wholeheartedly into Corrie (ask my husband) and its premise; like Kinkade’s paintings are for some, for me Corrie is comfort food, a place to escape to, somewhere (unless Ken’s having one of his perennial, kimono-akimbo, stomach-turning affairs) better.

So there you have it. If I diss Kinkade I’m not only an art snob, I’m a hypocrite. And that, my friends, would never do.
My Dalmatians would hate me.

18 thoughts on “Kinkade and Corrie: the Ugly Truth”