What the hell is Tate Britain on?

We’re currently ‘enjoying’ Picasso and Modern British Art, a cobbled-together show that, unsurprisingly, serves only to emphasise the inferiority of the home-grown, and now we’re about to be treated to a major exhibition of the Pre-Raphaelites, sold to us as the work of ‘revolutionaries’, of ‘radicals who did nothing less than change the world’.
Now I’ve nothing (much) against the PRBs – the work is nice to look at (mostly) – but to cast it in this light really is Utter Bollocks.

The ‘medievalist’ reaction against rationalist neo-classicism and rapid industrialisation began long before 1848, and was already embedded in the post-Romantic mid-Victorian sensiblity: the popularity of the Gothic novel, the great medieval epics and romances, Scott’s Waverley novels; the Pugin-led Gothic Revival in architecture and the rise of Tractarianism which sought to re-introduce pre-Reformation ritual and liturgy within Anglicanism; etc, etc. If one should doubt the essentially conservative nature of this ‘taste’, one should remember that in 1844 Pugin won the competition to design the Palace of Westminster, the Houses of Parliament, the very heart of the British establishment.

Meanwhile in Vienna, as early as 1809, a group of artists, the Nazarenes, had already proposed a return to the values and practices of the Quattrocento:
“The principle motivation of the Nazarenes was a reaction against neo-classicism and the routine art education of the academy system. They hoped to return to art which embodied spiritual values, and sought inspiration in artists of the late Middle Ages and early Renaissance, rejecting what they saw as the superficial virtuosity of later art.” (Wiki.)
Sound familiar?

Far from being the Che Guevaras of Victorian England, the PRBs were band-wagon-jumpers, late-comers to a party that had been swinging for decades. Tellingly, the Tate sees them as “the equivalent…of Damien Hirst today”; I do, too: essentially opportunists who squandered whatever talents they had in the creation of kitsch. Kitsch is not about the imagination or allusion, it’s about fantasy where everything is acted out; it’s sentimental, falsely nostalgic; it’s “the trappings of belief rather than the thing believed in”, (Roger Scruton). 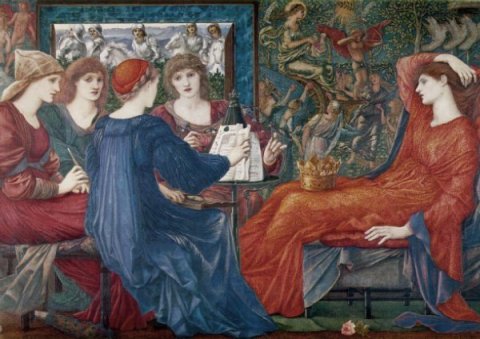 As I said, I like some of the work, Rossetti’s in particular: gorgeous to look at, even if his women are built like all-in wrestlers. Holman Hunt I loathe with a passion: lurid, moralising, literal to the point of banality. Burne-Jones is nothing more than decoration, finely-worked wall-paper. But like them or not, noone can seriously consider them artists of the first rank, much less as ‘avant-garde’. Oh, the exhibition will do well; as the Tate cheerfully admits, it will be full of ‘crowd-pleasers’, and this is the point: people will go in their droves, however the show is sold to them – the sine qua non of kitsch is its mass appeal; so to sell it, the show, as something it’s not strikes me as at best disingenuous, at worst downright cynical.

Get a grip, Tate Britain, you’re beginning to tick me off.

Where I first saw the ‘news’:
http://www.guardian.co.uk/artanddesign/2012/apr/16/pre-raphaelites-exhibition-tate-britain?CMP=twt_fd