Right. Where were we?
Ah, yes: “disaffected cynicism”.
(And, in case you’re just about to have your tea, a healthy dose of the scatological.)

It’s a good while since I dusted off my All-Purpose-ArtiBollox-Detector™ (with optional Nut-Crusher) and went Damien-bashing; I began to think it was tediously easy; more to the point, post the monumental display of unbridled hubris that was the Gagosian/Hirst collaboration and then those appalling new ‘paintings’, every bugger was at it.
I hate a bandwagon. So much so, I actively sought out positive reviews. Just for the change.
“Poor Damien. He’s alright, really. I’d buy him a pint.”

Then I remembered: he’s made, like, a gazillion quid from getting other sackless sods to make shite.
He can buy me a pint.

Instrumental in returning me to my senses was a quote in last week’s Guardian from the late, great Robert Hughes (yes, him again; you can’t have too many Hughes quotes):

“The publicity over the shark created the illusion that danger had somehow been confronted by Hirst, and come swimming into the gallery, gnashing its incisors. Having caught a few large sharks myself off Sydney, Montauk and elsewhere, and seen quite a few more over a lifetime of recreational fishing, I am underwhelmed by the blither and rubbish churned out by critics, publicists and other art-world denizens about Hirst’s fish and the existential risks it allegedly symbolises.
One might as well get excited about seeing a dead halibut on a slab in Harrods food hall.”

Ya see?
Degrees of separation between Hirst and experience; between Hirst and authenticity; between Hirst and the real world. What kind of deluded, lily-livered namby-pamby wuss are you, Jonathan Jones, – “No encounter with a contemporary work of art has ever thrilled me like the day I walked into the Saatchi Gallery in 1992 and saw a tiger shark’s maw lurch towards me…” (you lurched towards it, by the way) – if you sustain ‘visceral shock’ over a pimped-up fish-bowl in the admittedly life-threatening, elemental confines of a London art gallery?
Embodied ‘primal fear’ as felt when viewing Jaws from behind a cushion, and to which the only reasonable response is “Big, innit?”

So, Hirsty, in memory of Mr Hughes, consider hostilities well and truly resumed.

On Sunday, happily, I came across this review, and delicious kick to boyo’s nethers, in Charisma Robot’s Day Trips to the Void blog, which reminded me how much fun Damien-bashing is when you put your mind to it. So moved was CR by Hirst’s oeuvre, she/he spent literally minutes creating this heartfelt homage:
Bottom Boom: A Conceptual Fart:

“Bottom Boom captures a moment frozen in time, a moment of existence, an action, that can never be experienced in that quintessential way ever again. Bottom Boom is a study on ontology and the way it delineates our existence… The wonder of the body in motion meshing with time and existence, having awareness of itself and its death, the waste of lives ever moving in a cycle of creation and destruction. The ebb and flow, the yin and yang, the immorality and the morality bla bla bla bla…”

Yes. CR farted into a glass box. Or pretends she/he did. Or, more likely, got someone else to do the farting. Either way, so very ‘Hirstian’.
(Of course, I could add that this work clearly references and engages in debate with Piero Manzoni’s Merda d’artista (1961), but that would be talking crap, and we can’t have that.)

Serendipitously, (the Blessed Robert was surely guiding my hand by now) I then stumbled upon an ancient (2008) article from The Daily Squib:
“Arse Hole, by Damien Hirst”: 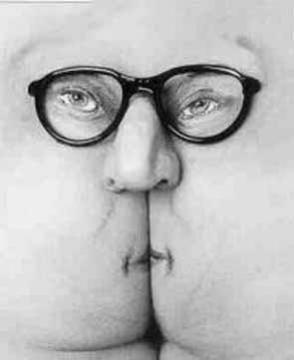 Tee-hee.
I know, I know…
Puerile, facile, really not helpful. Cheap shots, for sure, with far too much ‘arse’.
But Hirst’ll do that to you.
Anyway, I’ve spent the last fortnight in a state of Olympics-induced beatific magnanimity.
It was never going to last. 😉

It is a truth universally acknowleged by at least four people that I have no love for Damien Hirst, Artist; (Damien Hirst, Chap, is quite a different matter: he makes me chuckle, and you can’t put a price on that.) Some of those four (two) who actually give a toss about my views on anything at all have equated this animosity with an antipathy towards Conceptual Art in general: this is not the case.

Admittedly, it’s taken me a while to get over myself and actually look at Conceptual Art with something other than a prejudiced eye, but I’ve found, unsurprisingly, that yes, some I like very much, I ‘get’ it. (I’ve also had to admit to myself that there’s quite a lot of ‘traditional’ or ‘great’ art that leaves me cold: El Greco, for example, – that ghastly palette, those writhing forms, that oppressive, peculiarly tight-arsed religiosity make me feel really rather sick.)

Anyway, back to Conceptual Art.

My problem with Mr Hirst is this: for me, there is no humanity. The artefact – I hesitate to call it ‘art’ – has no ‘heart’. I may have been shocked and disgusted on cue (once upon a time), but this is not the same thing at all. I have never, not once, been moved by anything he has created: it seems the more I put into his stuff, the less I get out of it. Call me old-fashioned (please), but intellect without emotion does not make for good art and never has, be it in music, literature, performance, whatever. Hirst’s work seems to me glib, disingenuous, cynical, the very antithesis of what it is to be humane.

But then, Hallelujah! – I discovered the work of Felix Gonzalez-Torres; Conceptual Art became, for me, a whole new ball-game, one that repaid my attention. 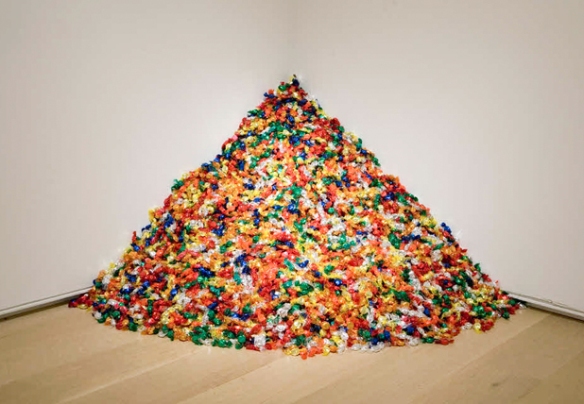 Untitled (Portrait of Ross in LA)

What do you think when you see a pile of colourful, shiny cellophane-wrapped sweets? I think, Ta very much, I’ll take two! I think of the big tins of ‘Roses’ we have at Christmas; of giving and sharing. And we are meant to share, to take the sweets and deplete the pile, and every day that the artwork is on show it is restored to its original weight of exactly 175lbs, which, as the accompanying wall-text (text, titles, are the sine qua non of Conceptual Art) tells us, was deemed by his doctor to be Ross’ ideal weight. Safe to assume, I think, that Ross was a fun, social guy, freely giving of his time and spirit. But that note on the wall undercuts all this gaiety with something very serious, even frightening: ‘sharing’ also references Ross’ AID-related death; contagion, infection; ‘share’ too freely and you will be sick. The daily depletion of Ross the work can be read as the daily depletion of Ross the lover of Felix through the ravages of terrible illness. The celebration of someone deeply loved and missed is inextricably tied to the manner of his going, and it is this concept that, while the form of the work is fluid, becomes fixed through constant, daily re-iteration; a kind of Eucharist perhaps, a Holy Communion, where love and loss, participation and memory, combine and become something almost sacred.

This is so far above and beyond anything Hirst has ever done or even attempted to do. I cannot help but be intensely moved by Ross; yes, it’s ‘easy’, but it’s not glib; it’s considered, elegiac, moral, even; it breathes humanity. I’m still inclined to agree, anti-‘conceptually’, with Hockney: art should be about Poetry and Craft; but sometimes, just sometimes, in the hands of a real artist, the poetry is enough.

(Please don’t write me an essay on why El Greco is, like, fab. I’ve read ’em all. Or at least it feels like it.)