I’m reblogging this in support of the women at JPLNASA who object to the casual sexism (the most pernicious kind) displayed in the ‘cool’, dudely video. As usual, their voices are not being heard.

“…no matter the cause, the progressive left cannot deny, downplay or ridicule the seriousness of rape and sexual assault to treat women’s bodies as collateral in some wider battle. Women’s rights are not secondary to liberal or class politics, they are, and should be, placed at the their heart.”

~ Women from Compass, a group for the betterment of society, in a letter in Thursday’s Guardian.

To ‘feminist’ right-on male and female supporters of Pussy Riot: READ THIS:
http://radicalhub.com/2012/08/20/pussy-riot-whose-freedom-whose-riot/

From Lyn Gardener’s review of Shakespeare’s The Rape of Lucrece at the Royal Lyceum, Edinburgh:

“It’s a reminder that, in the powerplays of men, women’s bodies are often the battlefield”.

Excellent article by Tanya Gold on the current vogue for ‘rape jokes’ at the Edinburgh Fringe:
http://www.guardian.co.uk/commentisfree/2012/aug/17/heard-one-about-rape-funny-now?CMP=twt_gu

Today on Spot the Misogyny: the viral video “We’re NASA, and We Know It”

This video was all over Twitter today and even @MarsCuriosity thinks it’s OMG THE BEST VIDEO EVAR!!1!

Am I the only person wondering why such a spirited celebration of geekery just HAD to include a headless dancing chick in an American flag bikini?  While every male in the video remained fully clothed with his dignity intact?

Hi! How are you?
Long time no see!

Yes, at least half my life has been put on hold while I savour The Greatest Show On Earth and thank God I’m not Australian. I’m no sports fiend, but it’s so exhilarating, so uplifting, to see anyone doing anything to the absolute peak of her/his ability, whether it’s winning a chestful of medals or recording a PB; in a world where gratification and reward are increasingly expected to be instant and involving the least possible effort, it’s a timely reminder that the best most often comes from long, dedicated, slow-cooking.

That’s Jason Kenny on his way to a gold medal.
I’m (morbidly, not pervily) fascinated by the sprint cyclists’ thighs. Who would win a thigh-off between a cyclist and a speed-skater? Where on earth do they buy their trousers?
Important stuff, I’m sure you’ll agree.

I also want to mark, as so many have, the fiftieth anniversary of Marilyn’s death. She remains elusive to me, and, I think, to the zillions who profess an opinion on who/what she was; suffice to say, to a gawky, angular, too-tall, un-pretty adolescent she was a vision of what a woman ‘should be’: lusciously ripe, petite, baby-faced, baby-voiced, desired and accommodating.
Then I grew up. 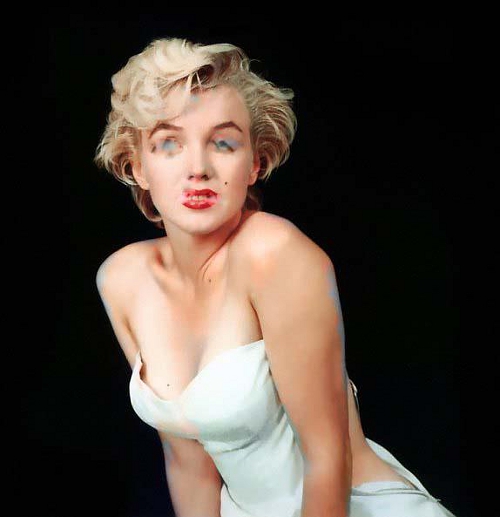 Finally, RIP the great Robert Hughes, whom I thank for providing my favourite ever art quote. Not this one – you should know which I mean by heart by now! – but it’s pretty damn good too, not least for being applicable to all human endeavour, not just ‘art’:

“There is virtue in virtuosity, especially today, when it protects us from the tedious spectacle of ineptitude.”

Speaking of which: nearly forgot: huge congrats to NASA!
(Why did I nearly forget? Why aren’t we more thrilled at Curiosity landing on Mars? Are we indeed suffering from what William Gibson calls Future Fatigue?)
This is MARVELLOUS!!

Again, as in the Olympics, people, just people, being the best they can be, through sheer hard graft and patience, at what they do.
If you don’t take inspiration from all of them someone should check your pulse.

So, somewhat bitty and rambling, but I just wanted to check in.
Back to cogency, sense (really?) and rampant disaffected cynicism next week when, all being well, I’ll be less distracted and emotional.

Really enjoyed this by Chris at Anxiety and Biscuits: A Very British Olympics…